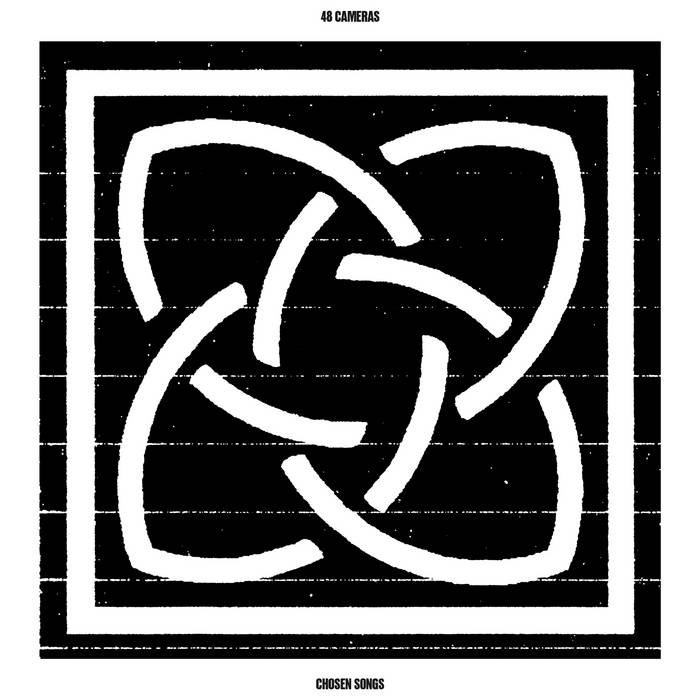 A typical nightly phone call between Jean-Marie Mathoul and Yves Tassin – Jean-Marie had decided to change his name to Jean during the last years of his life. Yves, close friend and longtime collaborator to J-M’s 48 Cameras project, refused to accept the name and possible character change.

48 Cameras was the brainchild and life project of self-proclaimed non-musician Jean-Marie Mathoul († 04/07/2018), a social worker born and raised in Huy who carefully conducted 48C towards cult status. After hearing an album of William S. Burroughs reciting poetry, J-M decided to put poems and spoken word to music. He was a poet in his own right, having already published a.o. Une cure au cancer (A cure for cancer), a book of poems which at times was wrongly sold alongside medical books. At a literary event in Liège, Belgium, he met UK-based writer Paul Buck (author of the novel The Honeymoon Killers) and the two of them decided to collaborate and thus formed 48 Cameras. The name of the collective references photographer Eadweard Muybridge and a poem by Jim Morrison; "Muybridge derived his animal subjects from the Philadelphia Zoological Garden, male performers from the University. The women were professional artists' models, also actresses and dancers, parading nude before the 48 cameras'' (in The Lords and the new creatures).

It is important to note that 48C is somewhat of a non-band. The musicians and collaborators never actually recorded together, and to this day some haven’t even met each other. Before starting the recording process, J-M built an album in his mind: choice of album and song titles, who was to collaborate, even the artwork was clear long before the first note was played, leaving little room for surprises. All of this was carefully collected in decently structured Atoma notebooks full of polaroids, annotations and cut-out photos of paintings and advertisements of cigarettes. An avid smoker himself (as long time collaborator Calo recalls: ‘sometimes he was smoking three cigarettes at a time, he’d forget he had already lit one or two’), the notebook papers slowly transformed into nicotine colored archives of a project that often feels like the musical masterpiece of a recluse puppet master, overviewing and directing things from his attic home studio, aptly referred to as “the Observatory”.

Throughout the years collaborators sent their parts by snail mail on tape, DAT or even MiniDisc, and with the arrival of the internet some began to upload their contributions. Never, however, was the collective present together in the attic studio.

Calo: “48C was not the place to show virtuosity, neither was it a place of conceptual minimalism. It wasn’t a question of less is more, making songs with J-M was a case of less than less is more! Each musical piece being a brick, stacked upon another and another and another, etc. I remember physically suffering in the studio, for one particular song, eight minutes long, the same bass notes, because he always wanted things to be done in one take. Jean-Marie didn’t care, it had to be done, no cutting or looping, regardless if my arms were hurting, he didn’t have a clue that I was hurting, and he didn’t care either. That being said, the recording sessions were precious moments. A recording had to be done in a sort of rush, once a take was recorded, we left it in the hands and mind of J-M, he chose the right recording and he could delete the rest - he really liked deleting things. But really, the musicians couldn’t over think the process, within 48C there weren’t a thousand solutions because we worked in a monotonal structure. The fundament was to understand the basic soundscape J-M was serving you, synthesize that and then head straightforward.
It was very important to accept the rules of the project, and it was just as important to not stay stuck into that. As much as one could be 48 Cameras, you had to take a break from the project too, because it was his project, for him it was everything.”

Jean-Marie even refused to recognize one album and a rare live show as being 48C, stating: “That’s not 48 Cameras.” Yves: “I remember one time being in a record shop with J-M, and I stumbled upon the second album we had released, however, J-M had told me that particular album no longer existed. In his typical stubborn style he told me: ‘Buy the album, but I’m leaving.’ It’s still not clear what his problem with that particular album was, but he didn’t want to acknowledge it. Of course when I was holding it in my hand he had to admit that it existed.”

J-M welcomed new collaborators by saying: “You are here, thanks to the Domino Principle: you’ll meet someone, who will allow you to meet a next person, after that one, another, etcetera.” This principle he held dearly, almost as a life philosophy. Which is not to say that all encounters were fructuous. Calo: “One day I introduced J-M to Tucker Zimmerman, so they could maybe collaborate, but nothing happened. On a photo taken on that particular day, you see J-M and Tucker silently sitting next to each other in the garden, not really talking to each other. Both personalities too strong to collaborate.”

Stubborn leaders demand to be tested, so at times some of the members of the collective decided to challenge J-M, telling him they’d sneak in melodies of popular hit songs.
Alain: “We told him we’d do it, of course J-M was furious and shouted he’d erase those parts if we ever dared to do such a thing, but we did manage to sneak some parts in, be it in a broken or slowed down way, for instance I did The bridge on the river Kwai, and Calo even played a part of Stairway to heaven and Hells bells at one point. Of course he was infuriated when we told him after the release was out, but he hadn’t recognized the melodies as such, so we had won.” (None of the musicians could remember exactly which 48 C songs they managed to penetrate with these pop song citations.)

Thanks to the family of Jean-Marie: Isabelle, Nicolas, Anne & Martin and everyone who worked on 48 Cameras, ever.