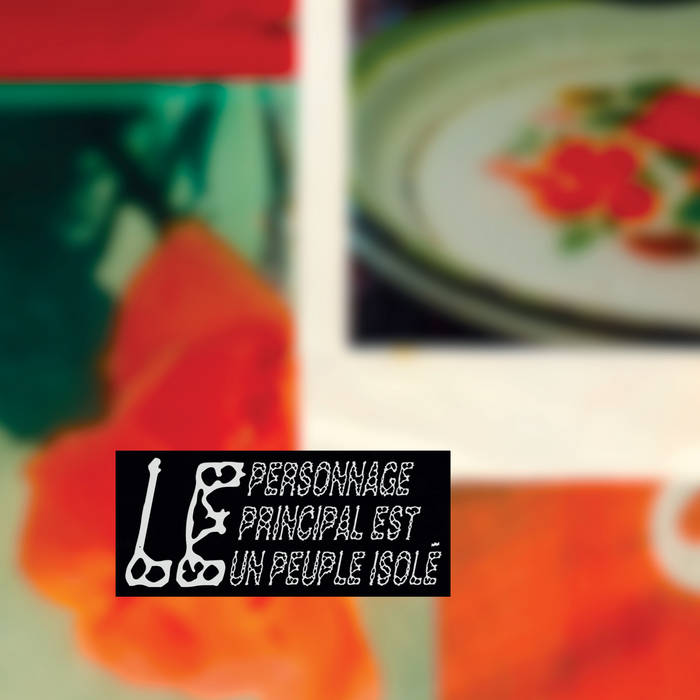 “Benjamin Lew was an enlightened amateur, in the noble and almost Renaissance-like sense of the word: he dabbled with equal grace in photography, writing, visual arts ... and worked part-time as a cocktail mixer in a tropical bar which was one of the favourite watering holes of Brussels’ thriving artistic community of the early ‘80s. Tuxedomoon had just moved to Brussels, and Steven Brown was among the many musicians, designers & artists who patronized the bar. Benjamin had a secret passion: he wasn’t a musician, but had acquired a small analog computer, with which he had started creating these strange mysterious little pieces. Benjamin played them to Steven and asked him if he’d agree to record with him. Steven was taken with them and accepted. The Douzième Journée was largely created in the studio by both protagonists, with the help of Gilles Martin and myself, in the spring of ‘82. Listening to his albums (he went on to record four more with Crammed) is like embarking on a dream journey to the Sahara or the Far East. You’d think that some of the pieces feature non-European musicians or samples but: no... this is just Benjamin’s imagination, his synths, and his friends…” Marc Hollander, Feb. 2019

Lew: ‘Fossile was a one-off project I did with my housemates, with whom I was making posters for gigs at Plan K (*) in Molenbeek back then. The newspaper was supposed to serve as some sort of portfolio for our graphic work. It was conceived as a fanzine, we printed 5000 copies, 2000 were at my place but I’ve lost them during one of the many times I moved apartments. The other 3000 were at the printing company, but they got burned in a huge fire. Apparently it was an attempt to shut the place down, presumably by right-wing activists/terrorists, because the company was printing “POUR”, an extreme left-wing publication which was investigating les ballets roses (pink ballets) and the Brabant killers, amongst other shocking events at the time. So most of the newspapers and the flexi-discs never reached anybody, but Marc Hollander of Crammed Discs got hold of a copy, and he proposed to make a record for him.’

* Plan K, the cult Brussels concert hall in Molenbeek, where the underground scene thrived between 1979 and 1986, with groups like Joy Division, Alan Vega, the Slits playing legendary concerts.

Au Papaya
At the time, Benjamin worked part-time as a cocktail mixer in ‘Le Papaya’, a tropical bar which was one of the favorite watering holes of Brussels' thriving artistic community of the early 80s:

Lew: ‘For months the guys of Tuxedomoon were staying in the apartment of Frédérique Flamant, who was the director of Plan K at the time. His apartment was just around the corner of the Papaya. That’s where I met Steven Brown and the rest of the bunch, purely by accident: Steven came to the bar to celebrate his birthday.’

‘I liked working at the bar. The hours corresponded with my lifestyle. Four hours of sleep were sufficient for me back then. Plus, I liked to drink, and of course there was enough booze at the bar! Although it caused some health issues, I have no regrets whatsoever, life’s been good to me!’

A spoon falling
Lew: ‘One time I was asked to make music for an advertisement for mineral water. The people from the agency were six in the studio, and the boss was in New York, listening to my music over the phone. I remember his feedback: “it needs the feeling of a spoon falling into a cup of coffee” and “I like it very much, but the piano should be replaced by a guitar”. Mind you, back in those days people were earning good money, and for a brief moment, I had some too.’

Modus Operandi
The basis of the music was made at daytime. On a small analog synthesizer Lew started creating strange, mysterious little pieces. Later on, he gave the recordings to the musicians he counted among the many creative clients of the Papaya.
Lew: ‘I made my recordings on the 8-track recorder Marc (Hollander) had lent me. At night, for instance, Steven came to the bar and I gave him a tape to listen to. After my night shift was done, we recorded his parts in the studio, in complete freedom. I gave all musicians carte blanche.’

‘I wouldn’t describe myself as a musician, rather a creator of noise, or “music d’ameublement” like Satie used to say. Furniture music, or sometimes more literally translated as furnishing music. I only started listening to music after I had stolen a couple of hundred of records from a store in Brussels which was opening its doors and a friend of mine had the keys. Before that, music didn't interest me at all. I was into books, and modern dance like Pina Bausch and Anne Teresa De Keersmaeker.’

Ugly drummers
Lew: ‘I hate drummers! Not personally, but the look of somebody drumming, it’s so ugly to me. By far and large I prefer drum computers. All other instrumentalists are nice to look at, but a live drummer, with his kick and his snares and cymbals, is so ugly to me. (laughs) I like percussionists though.’

SABAM
Lew: ‘Vincent Kenis transcribed my music to partitions. I did only two years of music courses, I can hardly even read partitions, so he helped me out with that. Because back then in order for you to declare your music at SABAM (*), you had to give them the partitions. Oddly, without the music sheets you couldn’t claim your music was yours. Vincent has incredible hearing, you can tap on a cup of coffee and he’ll tell you what note it is.’

* SABAM is one of the Belgian associations of authors, composers and publishers. The bilingual acronym stands for "Société d'Auteurs Belge – Belgische Auteurs Maatschappij”.

La Magnifique Alcoolique
Lew: ‘La Magnifique Alcoolique was named after a regular client at the Papaya. She was a beautiful woman, but heavily into alcohol, amongst other things probably. The type of character where it was clear to me that I wouldn’t be the one to pull her out of it, rather she’d be the one pulling me in. So I stayed away from her, and named the song after her.’

Après
Lew: ‘After this intense period I left for Bali with my girlfriend, and for more than a year I didn’t make any music. I wasn’t missing music, to be honest. My motivation to make music was to inspire people to do other things, that people would use it like painters use pots of paint. I love it when my music is used as a basis for other arts, like choreography or cinema.’

All music published by Crammed Music/Strictly Confidential
All tracks originally released by Crammed Discs as part of the Made To Measure Series.
This compilation (p) 2019 Stroom/Crammed Discs