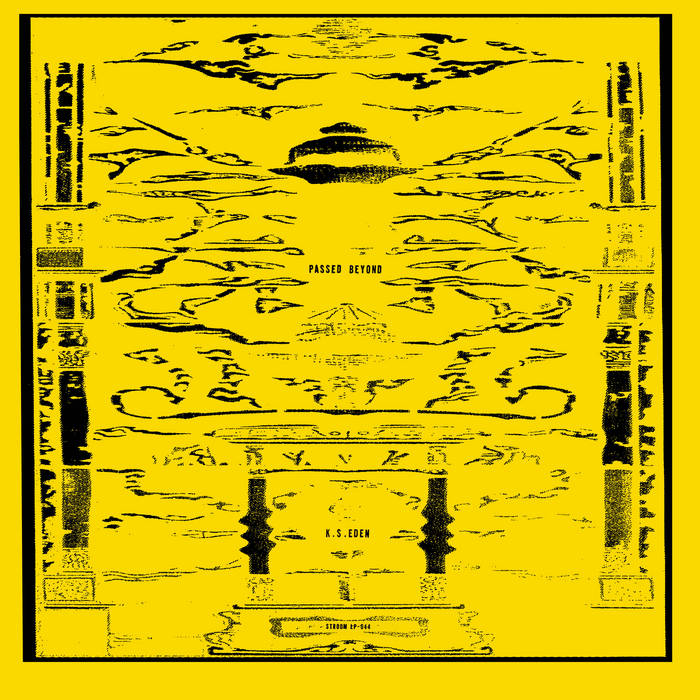 Throughout history there are many examples of artists who did not receive the credit their work is due during the years they were active. K.S. Eden is an artist who should be discussed in these terms.

Growing up in Stockport in the 1970s was an ideal place and time for the young Kevin Eden to receive exposure to the cultural hyper acceleration of Punk Rock. Like many young Brits of the era he was a huge fan of Marc Bolan and T. Rex before his interest in Progressive Rock tuned his ears to more explorative sounds.

His keen interest in literature led him to a local second hand bookshop which had a selection of records for sale in the basement. The man behind the counter was music journalist Paul Morley (later of ZTT Records & Art of Noise) who informed him of a gig happening at Manchester’s Lesser Free Trade Hall. The Sex Pistols were coming back to play a second show, this time supported by the debut of a band from nearby Bolton - Buzzcocks.

“Lydon was in your face. He came on like a lion that had been let out of a cage. The sheer ferocity of the sound, and his attitude. I can remember leaving there thinking ‘the world has changed’ - the musical landscape that I knew of had changed”

Like many others present at those shows and despite having zero musical training, Eden and his friend Peter Hibbert started a band. Initially they called themselves The Elite before eventually settling on the name Slight Seconds.

The band became involved in the Manchester Musicians Collective - a pool of local bands and experimental musicians organised by Dick Witts, who’s events gave early shows to many local acts including Joy Division & The Fall.

Slight Seconds contributed two tracks to their 1979 compilation A Manchester Collection (Bands Of The Manchester Musicians Collective), which was followed by the A-side of another compilation Waiting Room in 1980 - both released on Object Music.

Slight Seconds tenure would be fairly short partly due to Eden’s exposure to revolutionary London band This Heat. Their self-titled debut album made such an impression on him that he struck up correspondence with the band’s bassist Charles Bullen who invited him to see them play at Devilles, a tiny Manchester basement venue.

“Seeing This Heat was the day I wanted to give up. It kind of broke the band up in a way, and there became a schism between or around melody and rhythm”

Musical differences between Eden & Hibbert deepened following the intensity of their performance, with Hibbert questioning his drumming after seeing Charles Hayward behind the kit. Eden decided to call time on Slight Seconds.

Rather than form a new band, he started a project as a collaborative vehicle for working with other artists and musicians. He began using the moniker 41 Degrees which takes its name from Yevgeny Zamyatin’s pre-Orwellian novel We - stating it as the temperature at which paper burns.

His first venture was the 10 minute long Just… My Crazy Mind released on another Object Music compilation Do The Maru in 1981. The song captured his fondness for African music and was his first collaboration with David Coppenhall who provided the lyrics for the track in addition to the sleeve artwork for the record. Eden performed all instruments and vocals on the recording himself.

Eden’s work with Coppenhall continued into his next project, the 41 Degrees album Open Heart. He began to sketch out some basic demos using guitar with an early drum machine, then took out a bank loan to cover production costs. His budget stretched to ten days at Revolution Studios in Cheadle Hulme; seven for recording and three for mixing. But due to another band recording their album in the day time, the sessions would need to be overnight from 8pm to 8am.

The nocturnal sessions began with Eden and engineer Stuart Pickering laying down basic rhythm tracks from his demos. They then overdubbed instrumentation from Eden himself and various collaborators who drift in and out of the material, which takes on a far darker and edgier sound than Eden’s previous work.

Hours of recording time were dedicated to experimentation in the studio ranging from 28ft tape loops, eastern wind instruments blown into piano strings and ‘rattle bass’ - which was a bass amplifier faced towards the wall to create a booming sound with an open snare drum placed on top. The songwriting lacked a traditional verse/chorus structure, instead evolving in a natural but non-linear fashion. Hints of a reoccurring ambient theme thread through the album, resolving on the closing track November.

Coppenhall provided lyrics for some of the songs along with the striking sleeve artwork. A black and white composition of triangles symbolically representing a heart; distorted using experimental photography techniques and dark room trickery. Eden’s trust in the quality of his work was absolute, he insisted that the artwork was sent directly into production and only saw it for the first time once the copies arrived.

Unfortunately the self-released record went largely unnoticed which was partly due to poor distribution, but also a lack of reviews as the release date fell during a national press strike. 400 copies of the 1000 pressed were returned to Eden and destroyed.

Eden relocated to London shortly after the release of Open Heart and was musically inactive for a while until beginning to experiment with childhood friend Dennis Cook on visits back to Stockport. Cook lived across the street from Eden’s parents and had a basic recording set-up in his bedroom, in their early teens they had recorded a tape piece inspired by Mike Oldfield’s Tubular Bells together.

In 1985 they began sessions for Eden’s next album, a collection of ambient pieces interpreting the work of visual artist Russell Mills entitled Earth Murmurs and released under his own name K.S. Eden. The music was a far cry from the angular, guitar-led sounds of Open Heart and saw Cook take on the role of engineering Eden’s ideas:

The album was gradually completed over a two year period with Eden developing his direction for the material between visits to Stockport. He would meticulously jot down ideas in a notebook, and sketch out diagrams showing where he wanted things to sit in the mix with details on the progression and texture of the pieces.

The instrumentation of this material marked a new direction which would continue throughout Eden’s future output. Using an array of keyboards, drum machines, effects, field recordings and tape manipulation; he moved away from the live band sound of his previous work.

During the five year gap between Open Heart and Earth Murmurs, the cassette tape format had risen to prominence. After the costly process of producing his previous album, Eden took a DIY approach and dubbed tapes himself using his own artwork. A handful of copies were distributed to friends with a few sent out in hope of radio play or press reviews, although much like it’s predecessor; Earth Murmurs flew below the radar.

The lack of industry attention did not falter Eden’s momentum since the aim of his work was never to build a profile or carve out a musical career, he simply enjoyed the process of making music.

“I had no illusions that I was an artist, or a musician or.. anybody. I was just scratching a creative itch”

Towards the end of the Earth Murmurs sessions a few pieces emerged which laid the foundation for his next album Sounds Frame Silence. Completed in 1989 and taking its name from an Erik Satie quote, the tracks explore a concept Eden called ‘found & invented rhythm’ - found being sampled from existing recordings, and invented as played by Eden himself.

Field recordings and fragments of ethnographic material were recontextualised through swaths of effects, with hints of programmed drums, treated guitars and whaling synthesizers merging against a backdrop of pre-Rave sounding pads. The album was also produced and distributed on tape by Eden himself although this time even fewer copies were made.

Not long after the completion of Sounds Frame Silence he relocated to London to study Fine Art. During this period he produced a collection of long form ambient pieces to soundtrack audio-visual installations created for his degree. These captivating works titled Residuum would remain otherwise unheard until the release of this compilation.

In addition to his studies, Eden was involved in several other notable activities during the early 1990s. He penned an authorised biography of the highly-influential Post-Punk band Wire titled Everybody Loves A History marking the beginning of an ongoing relationship with the band. And following his studies, spent a brief period working as Brian Eno’s assistant at his Notting Hill studio space.

The Residuum tracks would be the final music that Eden recorded. He eventually settled back in Stockport and in 1995 co-founded the WMO label dedicated to reissuing Wire affiliated material. In recent years he has embraced the Vedantic Advaita tradition, and now goes by the name Veerji Hasyananda - a title conferred to him by Laraaji, the well known ambient zither musician and teacher of laughter meditation who he has known for many years.

Veerji looks back at the work featured on this compilation with a comfortable detachment because in his view these recordings were made by a different person to who he is today. Rather than harbouring feelings of regret or frustration that his output did not reach an audience, he feels blessed for it to have another opportunity today.

Thanks to all the musicians and friends who supported, contributed and helped in the creation of this music. Special thanks to Adam and Ziggy for their enthusiasm and belief in wishing for this music to be re-heard.