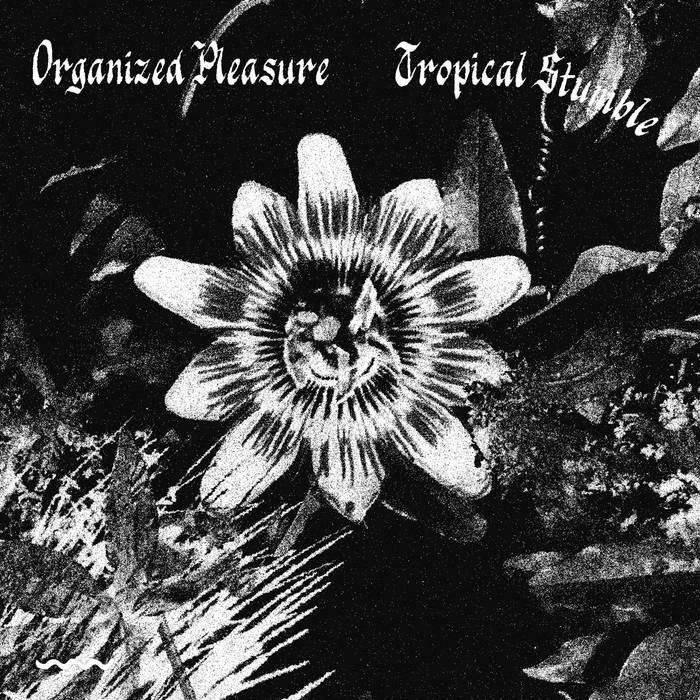 1981.
In popular imagination, the early 80s were dreadful. Thatcher and Reagan led the world on a diet of austerity, unemployment and depression. The Berlin Wall separated East from West. The Sex Pistols had broken up. In sum, the future was unsure. Belgium was no exception. While Punk had been declared dead by some, its spirit was still roaming in country parishes and city alleyways. As the Catholic bourgeoisie provided young people with few opportunities, music was an obvious pastime. Teenage hopes of starting a band and putting out a record were everywhere. Organized Pleasure and Satin Wall were two bands living the dream. In contrast to a thousand others, they left us sounding evidence. This split 7” gathers two tracks originally recorded in 1981. It was the first and only studio excursion for both groups. After some local gigs, the people involved moved on to other projects. While their music is illustrative for the era, their story is distinct. Same but different.

Kortrijk.
Organized Pleasure was a three-member band in Kortrijk, a mid-sized town in West Flanders. Until the P.I.G.Z. (Punk Is Grote Zever) won the First Belgian Punk Contest in 1978, there was barely any trace of a local scene. The young Dominiek De Candt was one of many who wanted to do something. As he started working in the jewellery industry at the age of 14, he quickly bought himself a bass-guitar. Soon, however, he would swap it for the ‘real’ guitar of a friend. In the meantime, he and Philippe De Coene, who he knew from the local socialist youth section, had been playing together on a regular basis. Being quite into this peculiar compilation album called No New York (1978), they felt they needed to add something to their sound. This is how Thierry Sabbe (keys) got involved. As the guys turned 18, they went off to university and fulfilled their military service. Nonetheless, they found time to go to a studio in Doornik to record what they had been up to. Unfortunately, the sound engineer told them he was unable to record their TR 808. In order to go through with the whole plan, they had to rush to find a real drummer. After some calls, they ended up with a hard-rock drummer who was more into crash cymbals than into Kraftwerk. Though they would have liked a tighter drum pattern, they self-released a 7” with two tracks. This compilation features the B-side “Tropical Stumble”. While the lyrics are multilingual, the one recurring theme is sleeping sickness, a terrible tropical disease in Central-Africa. “But don’t read too much into it! In the end, it was all a bunch of nonsense. We would shout whatever popped in our heads.”

Brussels.
The local context of Satin Wall was quite different. Being raised in Anderlecht, Olivier Gilles and Christian Midelear were able to hang out in the Brussels punk milieu all the time. They drank beer in the anarchist bar De Dolle Mol. They bought music in the record store Casablanca Moon. And they went to concerts at Plan K. It was here that they were inspired by bands like Joy Division, Cabaret Voltaire and Throbbing Gristle. They weren’t the only ones. At their school, the Athénée Joseph Bracops, there were a bunch of short-haired teens messing around with guitars (the Mad Virgins for example). It was in this vibrant scene that Satin Wall found its vocalist. After the split of H2SO4 (another Anderlechtois punk band) Didier Petit joined forces with Gilles and Midelear. Not long after, Michel Lambot, founder of Sandwich Records, came up with the idea of a compilation bringing together all kinds of early 80s Belgian punk. It was for the sake of this project, that “Dans Les Profondeurs” was recorded. Whereas Petit had already left Satin Wall before this B9-compilation came out, the whole thing left a bitter taste to Gilles and Midelear. As they paid for the studio time themselves, they were (and still are) very disappointed with the quality of the tape. The recording studio in Anderlecht was fairly amateurish. There were only three headphones. Nadia Hennau, Gilles’ girlfriend back then who provided the female vocals, had to sing without one. She had to somewhat guess the rhythm by looking at the other guys. By the way, the lyrics of the track were less depressing than one might think. As Gilles recalls: “I wrote the text while I was waiting for the last tram at Rogier. It was disgusting, the blue neon light was looming and the place was very grim. It took more than half an hour and I was getting bored”. Of course, the voices of Hennau and Petit soak the track with delicious tristesse, but in essence it was “just a song about trams”.